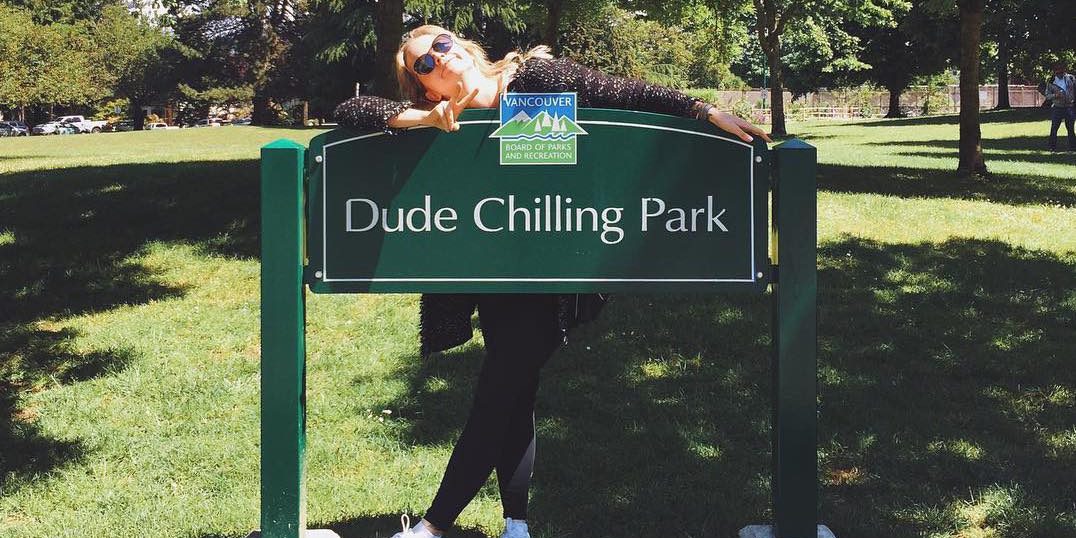 Michael Dennis’ “Reclining Figure” is the unofficial mascot for Westcoast ethos. The wooden statue, located in Vancouver’s Guelph Park, is a jaunty but unquestionably relaxed fellow made out of wood. He embodies the pose of so many people who flock to the West, simply so they can sprawl around him at 2 p.m. on any given Tuesday. Or on any day when the sun is out.

Guelph Park was famously renamed after prankster artist Viktor Briestensky erected a replica Parks Board sign that read Dude Chilling Park. After the city took it down – totally not chill – a petition was launched locals fought to get it back. And they did! The park is now widely (thought not officially) known as Dude Chilling Park.

It’s a heartwarming story about what happens when a neighbourhood bands together to fight for something they truly believe in: the privilege to forever be associated with the being the chillest place on earth. Put that on a map.

There’s an unspoken acceptance that the West, championed by Vancouver, is a region where chilling, as oppose to the opposite of chilling, is top of mind. It’s not the type of place where you go to work, then an after-work function, where you talk about work, then go home to do more work, and then do it all the next day.

Naw, the West lives and yearns for its downtime – it’s a driving force in the collective Westcoast psyche. And while that may give the impression that we’re lazy or inefficient, that’s not the case at all. How can we continually top Most Livable Cities lists if we’re couch-bound sloth-heads? We’re certainly getting something right.

Yes, shit gets done, but we don’t care to let that define us. We’d prefer not to come across as stuffy or stain. Leave that to Toronto. Productivity is a force, sure, but it’s also an afterthought. What drives us is a quality of life and a quality of living. And that quality factors largely on how we spend our downtime – usually outside, sprawled out somewhere where the sun can find us.

This is why we embrace and even fight for our reputation as down-time-loving folk. Because if we’re going to be known for one thing, it might as well be our passion for unwinding, and hopefully inspiring others to get on board.