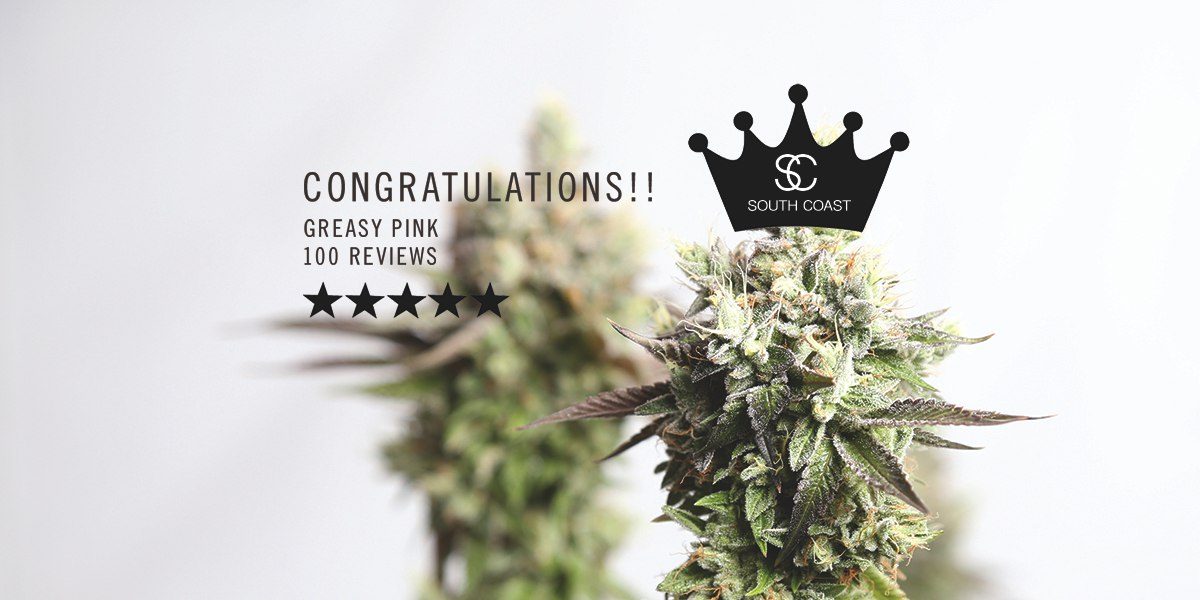 Congratulations to the South Coast’s Greasy Pink for reaching a 100 reviews with almost all 5 stars. This is definitely one of Canada’s most popular flowers.

When it comes to cannabis connoisseurs there are a variety of dynamic markers that win distinction for better or worse. It really does come down to personal preference, but you can draw some conclusions when there seems to be a consistent consensus by taste-makers that you’ve got a winner on your hand – perhaps even the worlds best weed?

Alright, look we know that’s a pretty prodigious claim and naturally if it’s something that we’re pedaling here for sale you can’t help but think that perhaps they’re maybe some biases at play. And beyond that there’s often some hyperbole and fake emulation at hand within the industry that is injected to a product to jog sales and course the hype.

Well in the case of one Master grower known as South Coast they embody the core principles of curating divine flowers with the good ol’ utilities of spectrum balance and full profile. The raving reviews and time enthusiast took to describe their experience is proof in itself.

Literally the best bud I’ve ever received from WP. Sweet, Sour, dank, sticky goodness. I had to save a couple pieces for friends to try, just to make sure I wasn’t just biased. Consensus confirms the is fire bud!

“This is one of the best strains I’ve ever smoked. Smells like sour berries, tastes a bit sweet, and amazing high. So deeply relaxing but oddly uplifting for an indica. Makes me feel connected to the people and things around me… less indifferent? Which is great for my depression.”

After smoking on this stuff for a little while i have to say I changed my mind on thinking this stuff isn’t worth the $300. Findind high end weed like this isn’t always that easy, i have gone through dozen’s of strains at other dispensaries and spent just as much or close to it for weed that doesn’t even come close. This stuff really is quite potent and if you give yourself a little break in the smoking for a half day or so you will definitely feel the intense buzz. It tastes just like it smell’s too, which is quite nice. Anyways, not looking for more review points, just wanted to edit my review here.

background: I have been a long time smoker. Recently starting purchasing medicine through a local dispensary. Stumbled onto here after doing some research. Without lab testing I always thought pretty looking flower was usually not the most effective. This strain completely changed that paradigm. Not only was the bud kept in large colas, only 5-8% could and ‘could’ is an overstatement considered popcorn nuggets. However, even these nuggets were coated in crystals/trichomes. The aroma was very fragrant. Greasy is definitely appropriate, and I now understand why good weed is called gas or loud. This was that. The smoke was the strongest I have had. This is a definite must by – save the money its worth it!

And there ya have it…